As your business grows, so too will your team of loyal robot workers and Piggy B’s appetite for luxury. You’ll make coins selling everything from tacos to fusion cores and more on your way to out-earning Bossworth, while your robot workforce ensures your profits keep rolling in even when you’re away from the game.

MeeWow Games is a small team of passionate idle gamers with big ideas to evolve the genre. This is highlighted by in-game Business Duels and special time-limited events involving off-the-wall trips – via interdimensional portals, of course – to Bizarro World, the Lost City of Atlantis, and more. But the best part is that players can travel between the diverse environments on Tap Empire’s world map freely, and can keep racking up profits across these multiple areas, simultaneously.

To promote the launch, Tap Empire publisher Flaregames has partnered with comedy actor Ewen Macintosh – best known as Keith from the beloved sitcom The Office – and the digital and social media platform 9GAG for a launch campaign that centers around the demanding-yet-loveable Piggy B. Starring Ewen Macintosh, here’s the first video that dropped today.

The entire campaign will be hosted on 9GAG’s Facebook and Instagram channels, and will also include a guest appearance from Instagram star Ross Smith. It turns out Piggy B already has lots of fans!

Download the game here and stay tuned to the Tap Empire Instagram page on October 13th for the next video episode! 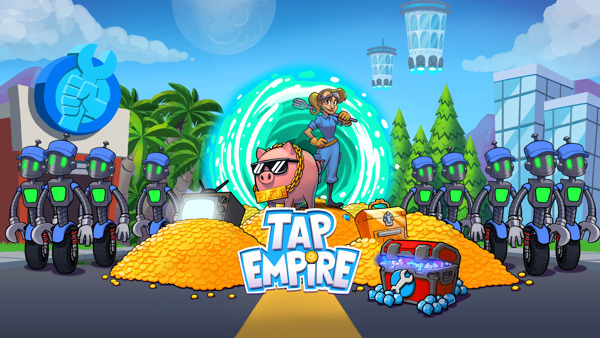