Chuck Norris has announced a competition that will enable fans to have the opportunity to create their own Chuck Norris facts and have them included in the final version of his new action game Nonstop Chuck Norris. In announcing the competition, Chuck Norris also confirmed the full game will be available for download for iOS & Android devices from next Thursday (20th April).

To take part, fans have to visit the game's website and create their own Chuck Norris fact, before sharing it on Twitter or Instagram alongside the hashtag #chuckchallenge. The five best Chuck Norris facts will be included in the final version of the game. The final decision on what facts will make the cut will be made by the man himself.

Last month's announcement that Chuck was to star in his own mobile game set the gaming world abuzz and Chuck has been busy promoting Nonstop Chuck Norris ever since. Following the initial announcement in early March, Chuck then set about targeting Google, persuading the Internet giant to make the game available for pre-registration on Google Play.

Speaking from his home in Texas, Chuck Norris commented, “I have been blown away by how the news of my game has been received. Allowing my fans the chance to create a Chuck fact for the game was my way of showing my appreciation. I look forward to reviewing the entries and the game's full launch on 20th April!”

The team behind this action-packed new adventure is flaregames, a mobile gaming publisher based in Karlsruhe, Germany. “The final countdown to the full launch of Nonstop Chuck Norris is truly on. We look forward to the seeing the entries to the #chuckchallenge competition as we put the final finishing touches to the game" said Klaas Kersting, flaregames CEO and founder.

In Nonstop Chuck Norris, harness the unstoppable power of Chuck Norris, with your role being to act as a sidekick to the man himself. In this (literally) nonstop adventure, assist Chuck Norris as he travels through multiple universes, fighting an infinite horde of punks and all-round bad dudes while collecting jokes and facts about his legendary status. In addition, power-up Chuck Norris with wacky weapons such as foldable chairs, chainsaws and even selfie sticks, and unleash signature moves such as roundhouse kicks and fist slams.

Nonstop Chuck Norris is published by flaregames and developed by Sproing. 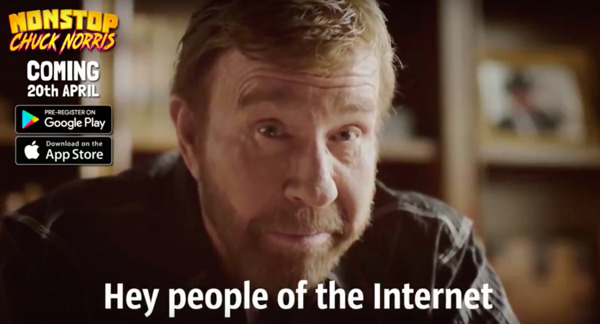