Installs of Royal Revolt 2 through Kakao reached nearly 120,000 units during the first 24 hours; the game went straight to No. 1 of the Kakao download charts. After four days the game also reached the Top 5 of the “most downloaded apps”-charts of Google Play Korea and entered the Top 30 of the best grossing Apps. It is among only a handful of games developed in the Western hemisphere to achieve such a success in Korea, the third largest mobile games market in the world.

The game’s launch was accompanied by a number of innovative marketing activities, orchestrated by Incross, among them a cooperation with upcoming Korean Rap stars C. Jamm and Vasco, who made songs and videos about the game.

“RR2 has enjoyed great success in the Western markets, and we believe it can easily be as successful in South Korea. Together with our friends at flaregames and our partners at Kakao we have worked hard during the last months to adapt the game to the taste of the Korean gamers,” says Incross CEO Jaewoon Lee. KakaoGame Global Business Team Manager Khan Ko adds, “We are excited to see Royal Revolt 2 launch on KakaoGame Platform. We hope to see great results from this game over the coming months.”

“Royal Revolt 2 has now come full circle – it is a truly global brand with success in every major region, from Europe to the Americas to Asia. But that’s just the first arrow in our quiver for 2015: We expect to surpass the success of Royal Revolt 2 with our upcoming mobile RTS Dawn of Steel,” says Klaas Kersting, CEO and founder of flaregames. Georg Broxtermann, flaregames co-founder and responsible for Asian partnerships, adds, “Our partners did great work in Korea, bringing our Asia strategy to fruition in a great joint effort. We always believed in the potential of a culturalized version of Royal Revolt 2 for Korea and were thrilled when we started negotiations with Incross and Kakao. We learned many valuable lessons in this cooperation that will go a long way towards making our upcoming games even more successful in Korea and other Asian markets.”

Royal Revolt 2 was launched in the Western markets in early 2014, first on iOS and Android, later on Windows Phone and Windows 8. The game has stayed in the charts since then, accumulating close to 20 million downloads. It was included in Apple’s “Best of 2014” list and is an Editors Choice game picked by the Google Play Editorial board. The series was developed by Keen Flare, flaregames’ Frankfurt studio. 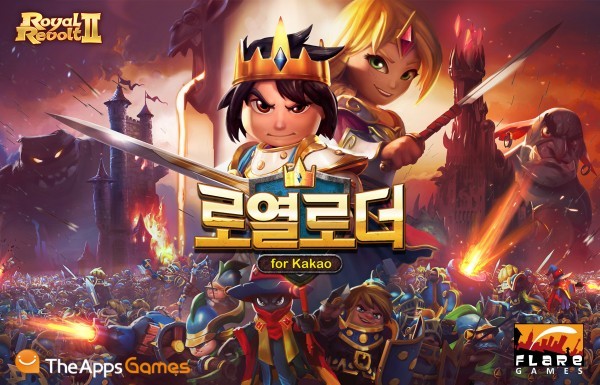