Last summer flaregames and developer Limbic announced a partnership deal to release the next instalment in the Zombie Gunship series, with the original game maintaining a #1 top-grossing chart position for several weeks after launching in 2011.

In Zombie Gunship, Inc., take the gunner seat aboard a heavily-armed AC-130 aircraft and wage war against zombies. As one of the survivors of a full-scale zombie apocalypse, gun down the undead from the skies and protect your ground troops during risky scavenging missions. After securing valuable resources needed for survival, upgrade your devastating weaponry and build up your remote airfield, which acts both as a shelter for survivors and your base for operations.

“Zombie Gunship, Inc. is a sequel that millions of players have been waiting for,” said Klaas Kersting, flaregames CEO and founder. “Our mission with the game is to redefine the mobile shooter genre, delivering a console-grade experience that is a natural fit for touchscreen devices. We look forward to seeing how both Zombie Gunship veterans and newcomers react to the game when it goes into beta in selected countries in the coming weeks!”

"Zombie Gunship, Inc. hits heavy on all the classic action intensity of the original, but this time around we've made enormous strides in the visuals, arsenal and battle gameplay,” said Arash Keshmirian, Limbic CEO and co-founder. “To top it off, we've added plenty of new features and mechanics I know our fans will love."

The beta version of Zombie Gunship, Inc. will be available in selected countries in the coming weeks. To stay updated on the latest release details and for exclusive content, sign up via our website: www.zombiegunship.com, or like our “Zombie Gunship, Inc.” official Facebook page.

For now, check out the below Let’s Play video featuring Sheiva from Limbic to catch a snapshot of the "gunship on zombie" action that lies in store! 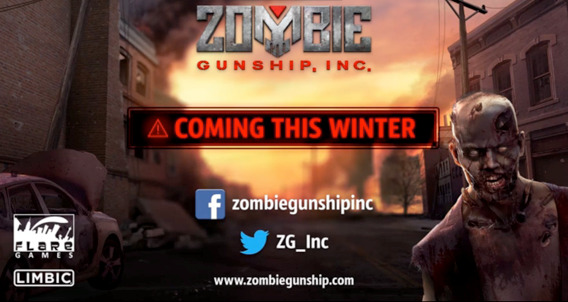